"Poetry is interpretative by having natural magic in it,
and moral profundity".
Touchstone Method is a short quotation from a recognized poetic masterpiece ‘The Study of Poetry’ (1880), employed as a standard of instant comparison for judging the value of other works. Here Arnold recommends certain lines of Homer, Dante, Shakespeare, and Milton as touchstones for testing ‘the presence or absence of high poetic quality’ in samples chosen from other poets. 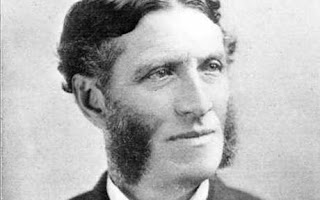 The" Touchstone Method" - introduced scientific objectivity to critical evaluation by providing comparison and analysis as the two primary tools for judging individual poets. Thus, Chaucer, Dryden, Pope, and Shelley fall short of the best, because they lack "high seriousness". Even Shakespeare thinks too much of expression and too little of conception. Arnold's ideal poets are Homer and Sophocles in the ancient world, Dante and Milton, and among moderns, Goethe and Wordsworth. Arnold puts Wordsworth in the front rank not for his poetry but for his "criticism of life".
Arnold writes, in order to judge a poet's work properly, a critic should compare it to passages taken from works of great masters of poetry, and that these passages should be applied as touchstones to other poetry. Even a single line or selected quotation will serve the purpose. From this we see that he has shifted his position from that expressed in the preface to his Poems of 1853. In The Study of Poetry he no longer uses the acid test of action and architectonics. He became an advocate of 'touchstones'. 'Short passages even single lines,' he said, 'will serve our turn quite sufficiently'.
Some of Arnold's touchstone passages are: Helen's words about her wounded brother, Zeus addressing the horses of Peleus, suppliant Achilles' words to Priam, and from Dante; Ugolino's brave words, and Beatrice's loving words to Virgil. From non-Classical writers he selects from Henry IV Part II (III, i), Henry's expostulation with sleep - 'Wilt thou upon the high and giddy mast . . . '. From Hamlet (V, ii) 'Absent thee from felicity awhile . . . '. From Milton's Paradise Lost Book 1, 'Care sat on his faded cheek . . .', and 'What is else not to be overcome . . . '
Like Ruskin Arnold too wanted the contemporary reader against certain fallacies; the ‘fallacy’ of “historical estimate” and the “fallacy” of “personal estimate” were both, in Arnold’s view, reflections of inadequate and improper response to literature. According to him, both the historical significance of a literary work as well as its significance to the critic in personal terms tend to obliterate the real estimate of that work as in itself reality is. The best way to know the class, to which a work belongs in terms of the excellence of art, Arnold recommends, is
“to have always in one’s mind lines and expressions of
the great masters, and to apply them
as a touchstone to other poetry.”
Comparing with the best lines and passages from Homer and Shakespeare, Arnold surveys the entire track of English poetry, and divides the various poets into the categories of the good-and-great and the not-so-good and not-so-great. His idea of tradition is select in that only the great constitute the body of literary history we should care for, and the rest we better ignore. Arnold’s view of the greatness in poetry and what a literary critic should look for are summed up as follows:
“it is important, therefore, to hold fast to this: that poetry is at
bottom a criticism of life;  that the greatness of a poet lies in his
powerful  and beautiful application of ideas to life,
—to the question: how to live.”
here is sort of manifesto for the criticism of the early Victorians as well as an indictment of the critical creed, ‘art for art’s sake,’ as propounded and advocated by the later Victorians.
Posted by Kashyap Deepak