Edith Wharton was fifty-eight when she published her masterpiece, although she was about ten years old when the events of The Age of Innocence start up—not much older than the little girl in Sir Joshua Reynolds’s portrait from which the novel takes its title—and had nearly finished her first novel, The Valley of Decision, when Newland Archer arrives outside Ellen Olenska’s apartment in Paris thirty years later. 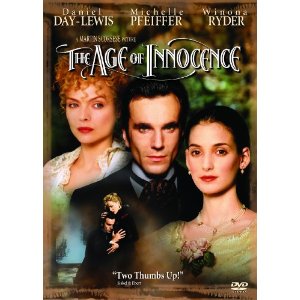 The novel spans her conscious life before she became a fulltime professional novelist, then—before James had urged her to “Do New York!” The italics were his. By then she was already said “not to relish the frequent references made by her readers to her indebtedness to Henry James.”[1] Two decades later, when she had come fully into her own, she was able to allude playfully to the master without fear of being relegated forever to the status of his disciple. Newland Archer’s very name is Jamesian. As always, her method is Jamesian, conforming to James’s precept that “every great novel must first of all be based on a profound sense of moral values.”[2] But the novel’s message turns James’s values inside out.
At the age of fifty-seven, after his wife May has died and Ellen (“the composite vision of all he had missed”) has returned to Europe, Newland reflects upon his experience. He knows that he has been “what was called a faithful husband,” and he also knows that, “if marriage was a dull duty,” the disregard of it was a “mere battle of ugly appetites.” And yet the suspicion gnaws at him:

The last sentence belongs to Newland’s author. Wharton rarely permitted herself such auctorial intrusions, but these words express her own view of life—after a loveless twenty-eight year marriage to a man

who was pretty much as Newland considered his wife May: “so lacking in imagination, so incapable of growth, that the world of her youth had fallen into pieces and rebuilt itself without her ever being conscious of the change.” Change the gender of the pronouns and you have Teddy Wharton.

She divorced Teddy in 1913 and published The Custom of the Country, her divorce novel, the same year. By then divorce was beginning to be so common in the United States that a Duchess says of Undine Spragg, “she’s an American—she’s divorced,” as if these were two ways of saying the same thing. Coming out seven years later, The Age of Innocence was Wharton’s marriage drama. She was ambivalent about marriage. Her biographer reports that she was “grimly fond” of a remark in Middlemarch: “Marriage is so unlike anything else—there is something even awful in the nearness it brings.”[4]
Her unequivocal contempt for the “ugly appetites” unleashed by adultery did not affect her tragic view of marital duty. The Age of Innocence is her subtle, carefully concealed refutation of The Portrait of a Lady, in which Isabel Archer consciously decides against rising above her daily level and agrees to be buried alive in marriage to a moral monster, sacrificing the long windings of her own destiny to the duty of protecting her stepdaughter. About a third of the way through the novel, Henrietta Stackpole enunciates James’s view of life, scolding Isabel that

Her return to her husband is Isabel’s fulfillment of this prophecy. For Wharton, however, this is itself a romantic view of “disagreeable duty.” If it were not such a howler of an anachronism, I would venture to characterize Wharton’s view as existentialist. Between the duty of marriage, which disqualifies a person from realizing his imagination, and the “ugly appetites” of erotic passion there is no exit. Man is tragically imprisoned between duty and appetite.
Newland’s manacles are forged by his own moral decisions. Even before he conceives a passion for Madame Olenska, Newland acts out of public kindness to her—moving up his engagement to May so that two families instead of one stand behind her, interceding with the van der Luydens to ratify her acceptance by Society—which creates a public debt of gratitude that Madame Olenska cannot ignore or default upon without moral damage to herself and Newland.
It is May Welland, of all people, who lays out the principle. When Newland flees to the Welland’s winter home in St. Augustine to escape his rapidly growing desire for Madame Olenska, May infers that something (as she puts it) has happened. He declares that he has come to implore her to move up the date of their marriage. She is innocently skeptical. “Is it,” she says—“is it because you’re not certain of continuing to care for me?“ When Newland reacts with anger, she asks quietly if there is “someone else.” Newland assumes that she is referring to his old mistress, discarded before he had begun to court May; and certainly that is the only assumption May would ever admit to. She insists upon knowing whether there is any feeling between Newland and another woman. “I couldn’t have my happiness made out of a wrong—an unfairness—to somebody else,” she says (ch 16).
Precisely because he shares this moral conviction, Newland cannot abandon May for Ellen Olenska, even when they openly acknowledge their love for each other at last. What is more, he had an earlier opportunity to do so—before any immorality would have attached to the break. In St. Augustine, May had offered to release him from his pledge. Out of a baffled inability to own the depth of his feeling for Madame Olenska, even to himself—out of a greater respect for respectablity than for the scandalous truth of deepening love—Newland refuses the offer. He makes his choice, and the iron door of tragedy slams shut.
That The Age of Innocence was conceived as a reversal of The Portrait of a Lady is made clear early on. After seeing Ellen at the theater (where he is vouchsafed a glimpse of the lovers’ parting that she and he will be obliged to reenact), Newland runs into his friend Ned Winsett. Newland is a dilettante; Winsett, a literary critic turned journalist. Their talk turns to culture. Winsett is properly scornful:

Both Isabel and Newland Archer—distant cousins, apparently, who share the same last name—belong to the natural aristocracy of open-hearted men and women, but their well-painted portraits—the moral graces they have cultivated in themselves—are wasted in empty houses. James saw greatness in the waste where Wharton saw only the waste.
The glittering and pharisaic Society of old New York, with its “elaborate mutual dissimulation,” which barricades it against the unpleasant, modestly draws a curtain over Newland Archer’s tragedy. By the end of the novel, that world has “reeled on its foundations.” The gain is knowledge of the tragedy; the loss is innocence.
____________________
[1] John D. Barry, “New York Letter,” Literary World 30 (May 13, 1899): 152.
[2] Edith Wharton, “Henry James in His Letters,” Quarterly Review 234 (1920): 188.
[3] Edith Wharton, The Age of Innocence [1920], ch 34 [also in Edith Wharton: Novels (New York: Library of America, 1985), p. 1294].