In 1958 Chinua Achebe published Things Fall Apart, the novel that helped usher in a new wave of African literature. Until that point literature concerning African had been written by European colonials, and was rife with derogatory depictions of African people and their varied cultures. With the contributions of Camara Laye, Amos Tutuola, and Chinua Achebe, amongst others, there came a rebellion of sorts - the African novel, going against “an age-old practice: the colonization of one people’s story by another.” 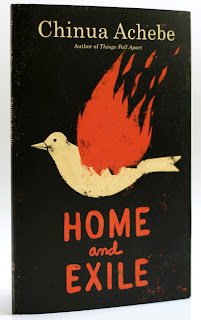 African literature is the subject of Home And Exile (2001),  a gathering of three lectures Achebe gave to an audience at Harvard University in 1998. Across these he uses his podium to to discuss the effect of colonialism on African letters and the need for balance. Of particular interest are the autobiographical elements peppered throughout, which give insights into Achebe’s early life in Nigeria and the beginnings of his adult life as a writer.
Achebe starts with his own people, the Igbo. He dismisses the notion that, in numbering over ten million, they can be a tribe by dictionary definition. He finds nation fits better, acknowledging that it’s not a perfect fit. In describing the Igbo culture, a culture of stories, he finds room to open up the differences wrought by colonialism, impressing upon the reader a little tale about a meeting of animals where the chicken, instead attending to a personal matter, is voted man’s primary sacrificial animal in his absence. It’s a fitting parallel with the native in colonial African literature whereby a portrait of the continent has been drawn up by outsiders, at least as far back as 1561, when John Lok, writing of his voyage to West Africa, describes Africans as:

…a people of beastly living, without a God, lawe, religion … whose women are common for they contract no matrimonie, neither have respect to chastitie … whose inhabitants dwell in caves and dennes: for these are their houses, and the flesh of serpents their meat as writeth Plinie and Diodorus Siculus. They have no speach, but rather a grinning and chattering. There are also people without heads, having their eyes and mouths in their breasts.

Compound that with centuries of unfair writing and you get to a moment in a Nigerian school when, having read Joyce Cary’s Mister Johnson, about a young Nigerian, it strikes as being superficial:

It was a landmark rebellion. Here was a whole class of young Nigerian students, among the brightest of their generation, united in their view of a book of English fiction in complete opposition to their English teacher, who was moreover backed by the authority of metropolitan critical judgment.

In talking of colonial literature, Achebe understands the treatment of African people as a way of justifying colonialism and the slave trade it produced, citing works by the likes of the aforementioned Cary, Joseph Conrad, and, especially, Elspeth Huxley. V.S. Naipaul, for whom much was made of his nastiness in Patrick French’s authorised biography earlier in the year, is also lambasted for his ignorant portrayal of Africa in A Bend In The River.


Although she’s not named, Buchi Emecheta, also gets a notable mention: not for her portrayal of Africa, but for going in the opposite direction. Having moved to London to pursue her writing career, she is quoted on the subject of African fiction and the dilution of her Africanness. (”After reading the first page you tell yourself you are plodding. But when you are reading the same thing written by an English person who lives here you find you are enjoying it because the language is so academic, so perfect.”) This notion of going in the opposite directon echoes an account opening the book of Achebe’s first ride in a car, in which he was seated so as to watch the road behind. It’s something he returns to in the third lecture, given that he, like Emecheta, no longer lives in Nigeria:

People have sometimes asked me if I have thought of writing a novel about America since I have now been living here for some years. My answer has always been “No, I don’t think so.” Actually, living in America for some years is not the only reason for writing a novel on it. Kafka wrote such a novel without leaving Prague. No, my reason is that America has enough novelists writing about her, and Nigeria too few.

Achebe’s focus now, unlike the child looking back, is squarely on the road ahead for Africa and its literature, noting his anxiety over “what remains to be done, in Africa and in the world at large”. From his podium he calls for writers to remain at home and write about it, to post their manuscripts rather than go overseas and risk dilution. Only with the right people contributing their own stories can literature find the necessary balance be made that will lead to a universal civilisation.


On literature he calls for a fair appraisal of writers’ work, comparing Dylan Thomas’ review of Amos Tutuola’s The Palm-Wine Drinkard to Huxley’s, wherein Thomas praises it for its language, Huxley uses the opportunity to take a broad swipe at African art (”It is possessed by spirits and the spirits are malign.”) Regardless of unfair treatments, Achebe notes that to read them:

…is the strongest vote of confidence we can give our writers and their work - to put them on notice that we will go to their offering for wholesome pleasure and insight, and not a rehash of old stereotypes which gained currency long ago in the slave trade and poisoned, perhaps forever, the wellsprings of our common humanity.

That Achebe covers so much ground in just over a hundred pages shows a highly concentrated approach to African literature. Those seeking a true autobiography will not find it here, given that it only touches on his early years, but what it does provide is an interesting insight into Achebe’s mind, with him pointing out the little details that have made him the influential writer that he is today, home and away.
Posted by Kashyap Deepak