A lecture by Jean-Paul Sartre given at The Club Maintenant in Paris, on October 29, 1945.

My purpose here is to defend existentialism against several reproaches that have been laid against it.
Existentialism has been criticised for inviting people to remain in a quietism of despair, to fall back into a the middle-class luxury of a merely contemplative philosophy. We are reproached for underlining human nastiness, and forgetting, as the Catholic Mme. Mercier has it, the smile of the child. All and sundry reproach us for treating men as isolated beings, largely because we begin with the 'I think' of Descartes. Christians especially reproach us for denying the reality and seriousness of human society, since, if we ignore God's eternal values, no-one is able to condemn anyone else. 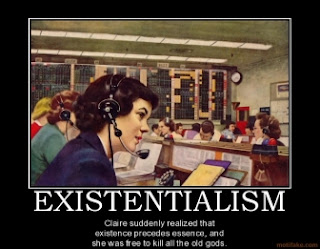