“Homilies, sermons in prose and verse, translation of the Psalms or parts of the Bible……fill the pages which form the  mass of what we may be called English literature until about the middle of the fourteenth century,” Rickett. And its first part is The Age of Chaucer (1340-1400), which “is the Age of unrest and transition, (Rickett).” 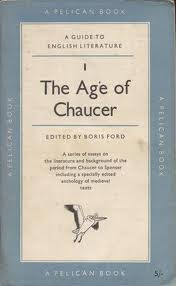 The fourteenth century brightly opened for industrial England but the glory was overtaken by plague, the Black Death (1348-49), as a result most of the laborers escaped death, left the country. The prestige of the Church was, in truth, beginning to decline, and, then came the birth of parliament. The literary moment of the age clearly reflected by five famous poets, in which, Langland, voicing the social discontent, preaching the equality of men and the dignity of labor; Wyclif, giving the Gospel to the people in their own tongue; Gower criticizing the vigorous life and plainly afraid of its consequences; Mandeville romancing about the wonders to be seen abroad; and Chaucer, sharing in all the stirring life of the times, and reflecting it in literature as no other but Shakespeare had ever done.


There is little to record about the prose which includes Chaucer’s Treatise on the Astrolabe; Wyclif’s Bible, but Mandeville’s Travels and Travellers keeps its place as the first English prose classic. The greatest gift of the age was “the heroic couplet Chaucer introduced into English verse, the rhyme royal he invented”, and its example is The Canterbury Tales which shows, Chaucer’s Age is still characteristically medieval, marked the persistence of chivalry.  In this Age, for the first time, the major poets wrote poetry in the native language, and make it a rival to the dominant French; as a result, literature came to be written which was read alike by all the classes of the literate.  Chaucer write
Through me men gon into that blysful place
Of hertes hele and dedly woundes cure;
Through me men gon unto the welle of grace


“With Chaucer was born our real poetry” (Arnold) who has “a fondness for long speeches and pedantic digression…long explanation when none were necessary” (Albert). Chaucer was much occupied by divers official duties which all helped to increase his knowledge of humanity and of affairs, and gave him that intimate, sympathetic acquaintance with men and women which was the raw stuff of his final accomplishment—The Canterbury Tales, an immense work of one hundred and twenty-eight tales, which covers the whole life of England, through 32 characters. The Canterbury Tales (c.1387-1400) is a cycle of linked tales told by a group of pilgrims who meet in a London tavern before their pilgrimage to the shrine of St Thomas a Becket in Canterbury. The Canterbury Tales had been essentially romantic, and so had never attempted to the study of men and women as they are so that the reader recognizes them, not as ideal heroes, but as his own neighbours. The work ends with a kindly farewell form the poet to his reader, and so “here taketh the makere of this book his leve”  In The Canterbury Tales it appears that he did not have a very high opinion of woman, but we find a remark respectable to women when he says about the Squire, Knight’s son:
“and born him well, as of so litel space;
in hope to standen in his lady grace.”


The critics have found the seed of the novel in The Canterbury Tales which is famous for the ten syllable rhyming couplets, which makes him, as Ward points out, “the first painter of character” that is why “Chaucer is to be regarded as English first story-teller as well as first modern poet,” cries W.J. Long. The Canterbury Tales had been essentially romantic, and so had never attempted to the study of men and women as they are so that the reader recognizes them, not as ideal heroes, but as his own neighbours. The work ends with a kindly farewell form the poet to his reader, and so “here taketh the makere of this book his leve.”

The most important thing that Chaucer did for English poetry was to bring a healthy realism to it. He brought poetry closer to nature, and or reality. He began as his contemporaries did, with dream visions and allegorical works. But gradually he reached the conclusion that nothing could be as nature herself. He comes to look upon the world of man. He set about reproducing it in his work. He became a painter of life in words. Chaucer’s broad and humane vision of life helped him in his portraiture of life. Sympathizing with the follies of men and women of average standards, he never riles and rants in his writings. He lets his character’s speak for themself. He is the pioneer of that set of people who look upon the world with indulgent, tolerant and amused eyes.

Chaucer is by universal consent the first great English humorist. His is a healthy humour like that of Shakespeare and Fielding that depends for its effect on strong commonsense. Chaucer had a sound mind and was capable of playing with humanity. He had so much sorrow in his life that could get down in his heart and weaken his intelligence or dim is sight. Chaucer had a free and open mind. He was not afraid, on occasion, of questioning even the ways of God to men. In The Knights’s Tale, he shows his poignant awareness of the baffling problem of pain and evil in the world. Chaucer found English a dry, uncouth brick but left it marble—beautiful and full of liquid luster. He found it a dialect and made it a Standard English of his own day. In his works, he appears as a great picture painter, as an observer whose aim was to see and not to reform, and as a representative of his century.

He was a great reformer and observer of men and had an extraordinary insight into human nature. “Chaucer sees things”, writes Legouis, “as they are, and paints them as he sees them.” He saw all sorts of men—rogues, hypocrites and posers—and had a soft corner in his heart for all of them. All of Chaucer’s characters are true to life and cause willing suspension of disbelief. Chaucer considered the first poet of English literature. In his poetry we find the great qualities of simplicity, clarity, melody and harmony which arouse fellow feeling and brotherly affection in the heart of the reader. Chaucer’s characters are a description of eternal principles” says Blake. They are not for one age but for all ages.

The world which Chaucer had created in the geography of imagination is as fresh as ever or even more fresh than the world in which we live. There is no doubt about Chaucer’s help to dramatist. Shakespeare is borrowing of a plot for one of his complicated plays, Troilus and Cressida from Chaucer’s Troilus and Cressida. Chaucer’s The Prologue may be described as “a novel of miniature”. It ahs an unrivalled richness and variety in the characterization, an abundant fund of humour, and a full representation of real life. He had the sweetness of Goldsmith, the compassionate realism and humour of Fielding, and the high chivalrous tone of Scott. Thus we follow the point fro Chesterton, that “There was ever a man who was more of a Maker than Chaucer.” Shakespeare and Milton were the greatest sons of their country; but Chaucer was the father of his country.
Posted by Kashyap Deepak