Twelfth Night: As a Romantic Comedy

Twelfth Night is a typical Shakespearean romantic comedy written about the time as Julies Ceaser, perhaps at the same time. Shakespeare borrowed this romantic comedy form Bandello’s The History of Apolonius and Silla. Music and love, drinking and jollity, practical jokes and a riot of laughter are also a part of the play. It is so romantic that not one, not two characters are in love but the whole atmosphere is full of love. The Duke is love sick and is in love with Olivia. Viola falls in love with the Duke and she inwardly wanted to marry him; both, Malvolio and Sir Andrew are in love with Olivia and wanted to marry her; whereas Olivia is in love with Cesario--- disguise in Viola, thinking him to be a man---- but she mistakes Sebastian for Cesario and gets hurriedly married to him. We are also told that sir Toby is married to Maria. 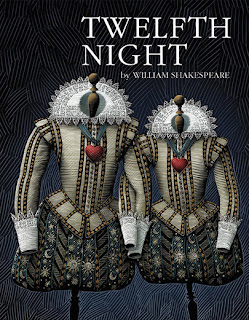 The setting of the play is romantic, that is, it is remote and unfamiliar. It exists only in the imagination of the dramatist. The scene of action in Twelfth Night is alleria, a country having no reality. Nicoll remarks that thought the action is full of imagination yet it is related to the real life. It is romantic in the sense that all the characters have no other business, but of making love; this aspect of Shakespearean comedy is fully explained by this play, which opens and ends upon a note of love.
The play opens with the Duke among his lords and musicians, and full of love for Olivia who refuses to see him. It is enough to make us understand that drama is to be one of those in which love is the prank player of the world. The Duke is like Sir Philip Sidney and one of those Elizabethans. His youth is “Fresh and stainless, free, learned and valiant”. He is also a lover of music, and his love calls for him music to feed his passion: “If music be the food of love, play on”. The Duke loves Olivia not for her money but because she attracts “his soul”.
Olivia, on the other hand, swears by the roses of spring, by her honour and by everything that she loves Cesario--Viola in disguise. However, he gives no encouragement to her but she reflects her love for him: “Well, come again tomorrow, fare the well A fiend like thee might bear my soul to hell”. And another heroine, Viola, falls in love with the Duke at first sight and she inwardly decides to marry him; though she is ready to woo Olivia to please his master, but she says: “Whoever I woo, myself will be his wife”. Hence, it is easy for the Duke, in the end, to love Viola whom he knew through and through in long championship.
In all the imagination the Duke is like Romeo in love with Rosaline, before he met Juliet. Like Romeo, he seeks solitude “I myself am best when least in company”. These words remind us of Paradise Lost where Adam observes: “sometimes solitude is the best society”.
The love affairs are not only a part of main-plot; they are seen very well in sub plot which concerns with Malvolio, steward to Lady Olivia, one of the two heroines of the main plot. He loves Olivia so Maria “a hawlk-eyed sparrow” thinks a claver plan against him with the help of other characters of the play. She writes him to a letter suppose to have been written by Olivia--- she can imitate the handwriting of Olivia. In this letter, it is written:

“If this falls into thy hands, revolve In my stars, I am above thee, but Be not
afraid of greatness, some are Born great, some achieve greatness,
And some have great thrust upon’em”

Malvolio on account of self love and self conceit believes that Olivia is in love with him and becomes a living joke--a joke that lives in the memory of reader even after the book is closed. The clown impersonating as Sir Topas, adds the difficulties to him.
The complication arises in Act V, when Olivia thinks Cesario to be her husband is called by Sebastian--- Viola is sister to Sebastian and to whom Olivia gets marries in the end--in the court before the Duke. In the court Viola is every moment on the edge of forgetting that she is a man. She expresses her love for the Duke in every word. When Viola’s true identity is disclosed the Duke accepts her as his wife. At the end he observes: “Here in my hands; you shall form By this time be your master’ mistress”. Thus, in the end, everyone and the heroine are united with each other happily, like Shakespeare’s another play As You Like it.
In Shakespeare’s comedy, women always hold the front of the stage, as his earlier comedies shows--like Rosalind in As You Like it and Portia in The Merchant of Venice. Here in Twelfth Night, it is Viola who is the body and the soul of the play; and the truth is that she is the both hero and the heroine of the play.  Shakespeare’s comedy is romantic that it does not follow the classical unities of time, place and action. Here only the unities of time have been observed. The main object of Shakespearean comedy is to present innocent pleasure and delight. The words of Charlton fully applicable to this comedy: “Shakespearean comedy is not satiric, it is public; it is not conservative, it is creative”.
One may add to it, Twelfth Night is one of the glorious footprints of “The Bard of Avon” that had left behind on the sand of time and that the world never let willingly die. Way the comedy moves from its brilliance to its excellence and turns “A thing of beauty is a joy forever”.
Posted by Kashyap Deepak