In answer to a publicity questionnaire from the American publishers of LORD OF THE FLIES, William Golding (born Cornwall, 1911) declared that he was brought up to be a scientist, and revolted; after two years of Oxford he changed his educational emphasis from science to English literature, and became devoted to Anglo-Saxon. After publishing a volume of poetry he "wasted the next four years," and when Word War II broke out he joined the Royal Navy. For the next five years he was involved in naval matters except for a few months in New York and six months with Lord Cherwell in a "research establishment." He finished his naval career as a lieutenant in command of a rocket ship; he had seen action against battleships, submarines and aircraft, and had participated in the Walcheren and D-Day operations. 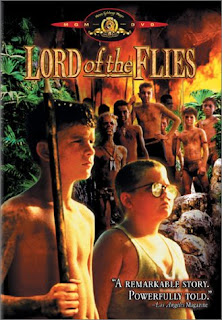 After the war he began teaching and writing. Today, his novels include LORD OF THE FLIES (Coward-McCann), THE INHERITORS (which may loosely be described as a novel of prehistory but is, like all of Golding's work, much more), and PINCHER MARTIN published in hardcover by Harcourt Brace as THE TWO DEATHS OF CHRISTOPHER MARTIN). He lists his Hobbies as thinking, classical Greek, sailing and archaeology, and his Literary Influences as Euripides and the anonymous Anglo-Saxon author of THE BATTLE OF MALDON.
The theme of LORD OF THE FLIES is described by Golding as follows (in the same publicity questionnaire): "The theme is an attempt to trace the defects of society back to the defects of human nature. The moral is that the shape of a society must depend on the ethical nature of the individual and not on any political system however apparently logical or respectable. The whole book is symbolic in nature except the rescue in the end where adult life appears, dignified and capable, but in reality enmeshed in the same evil as the symbolic life of the children on the island. The officer, having interrupted a man-hunt, prepares to take the children off the island in a cruiser which will presently be hunting its enemy in the same implacable way. And who will rescue the adult and his cruiser?"
This is, of course, merely a casual summing-up on Mr. Golding's part of his extremely complex and beautifully woven symbolic web which becomes apparent as we follow through the book, but it does indicate that LORD OF THE FLIES is not, to say the least, a simple adventure story of boys on a desert island. In fact, the implications of the story go far beyond the degeneration of a few children. What is unique about the work of Golding is the way he has combined and synthesized all of the characteristically twentieth-century methods of analysis of the human being and human society and used this unified knowledge to comment on a "test situation." In this book, as in few others at the present time, are findings of psychoanalysis of all schools, anthropologists, social psychologists and philosophical historians mobilized into an attack upon the central problem of modern thought: the nature of the human personality and the reflection of personality on society.
Another feature of Golding's work is the superb use of symbolism, a symbolism that "works." The central symbol itself, the "lord of the flies," is, like any true symbol, much more than the sum of its parts; but some elements of it may be isolated. The "lord of the flies" is a translation of the Hebrew Ba'alzevuv (Beelzebub in Greek). It has been suggested that it was a mistranslation of a mistransliterated word which gave us this pungent and suggestive name for the Devil, a devil whose name suggests that he is devoted to decay, destruction, demoralization, hysteria and panic and who therefore fits in very well with Golding's theme. 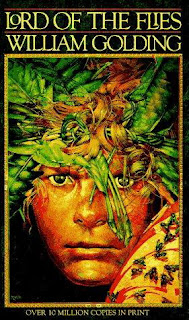 The Devil is not present in any traditional religious sense; Golding's Beelzebub is the modern equivalent, the anarchic, amoral, driving force that Freudians call the Id, whose only function seems to be to insure the survival of the host in which it is embedded or embodied, which function it performs with tremendous and single-minded tenacity. Although it is possible to find other names for this force, the modern picture of the personality, whether drawn by theologians or psychoanalysts, inevitably includes this force or psychic structure as the fundamental principle of the Natural Man. The tenets of civilization, the moral and social codes, the Ego, the intelligence itself, form only a veneer over this white-hot power, this uncontrollable force, "the fury and the mire of human veins." Dostoievsky found salvation in this freedom, although he found damnation in it also. Yeats found in it the only source of creative genius ("Whatever flames upon the night, Man's own resinous heart has fed.").
Conrad was appalled by this "heart of darkness," and existentialists find in the denial of this freedom the source of perversion of all human values. Indeed one could, if one were so minded, go through the entire canon of modern literature, philosophy and psychology and find this great basic drive defined as underlying the most fundamental conclusions of modem thought.
The emergence of this concealed, basic wildness is the theme of the book; the struggle between Ralph, the representative of civilization with his parliaments and his brain trust (Piggy, the intellectual whose shattering spectacles mark the progressive decay of rational influence as the story progresses), and Jack, in whom the spark of wildness burns hotter and closer to the surface than in Ralph and who is the leader of the forces of anarchy on the island, is also, of course, the struggle in modern society between those same forces translated onto a worldwide scale.
The turning point in the struggle between Ralph and Jack is the killing of the sow (pp. 133--144). The sow is a mother: "sunk in deep maternal bliss lay the largest of the lot... the great bladder of her belly was fringed with a row of piglets that slept or burrowed and squeaked." The killing of the sow is accomplished in terms of sexual intercourse. They were just behind her when she staggered into an open space where bright flowers grew and butterflies danced round each other and the air was hot and still.
Here, struck down by the heat, the sow fell and the hunters hurled themselves at her. This dreadful eruption from an unknown world made her frantic; she squealed and bucked and the air was full of sweat and noise and blood and terror. Roger ran round the heap, prodding with his spear whenever pigflesh appeared. Jack was on top of the sow, stabbing downward with his knife. Roger (a natural sadist, who becomes the "official" torturer and executioner for the tribe) found a lodgment for his point and began to push till he was leaning with his whole weight. The spear moved forward inch by inch, and the terrified squealing became a high-pitched scream. Then Jack found the throat and the hot blood spouted over his hands. The sow collapsed under them and they were heavy and fulfilled upon her. The butterflies still danced, preoccupied in the center of the clearing. 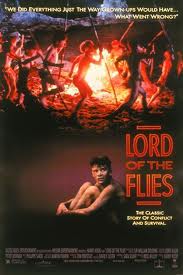 The pig's head is cut off; a stick is sharpened at both ends and "jammed in a crack" in the earth. (The death planned for Ralph at the end of the book involves a stick sharpened at both ends.) The pig's head is impaled on the stick; "... the head hung there, a little blood dribbling down the stick. Instinctively the boys drew back too; and the forest was very still. They listened, and the loudest noise was the buzzing of flies over the spilled guts." Jack offers this grotesque trophy to "the Beast," the terrible animal that the littler children had been dreaming of, and which seems to be lurking on the island wherever they were not looking. The entire incident forms a horrid parody of an Oedipal wedding night; these emotions, the sensations aroused by murder and death, and the overpowering and unaccustomed emotions of sexual love experienced by the half-grown boys, plus their own irrational fears and blind terrors, release the forces of death and the devil on the island.
After this occurs the most deeply symbolic incident in the book, the "interview" of Simon, an embryo mystic, with the head. The head seems to be saying, to Simon's heightened perceptions, that "everything was a bad business.... The half-shut eyes were dim with the infinite cynicism of adult life." Simon fights with all his feeble power against the message of the head, against the "ancient, inescapable recognition," the recognition of human capacities for evil and the superficial nature of human moral systems. It is the knowledge of the end of innocence, for which Ralph is to weep at the close of the book. "'Fancy thinking the Beast was something you could hunt and kill!' said the head. For a moment or two the forest and all the other dimly appreciated places echoes with the parody of laughter. 'You knew, didn't you? I'm part of you? Close, close, close! I'm the reason why it's no go? Why things are what they are?'"
At the end of this fantastic scene Simon imagines he is looking into a vast mouth. "There was blackness within, a blackness that spread.... Simon was inside the mouth. He fell down and lost consciousness." This mouth, * the symbol of ravenous, unreasoning and eternally insatiable nature, appears again in PINCHER MARTIN, in which the development of the theme of a Nature inimical to the conscious personality of man is developed in a stunning fashion. In LORD OF THE FLIES, however, only the outline of a philosophy is sketched, and the boys of the island are figures in a parable or fable which like all great parables or fables reveals to the reader an intimate, disquieting connection between the innocent, time-passing, story-telling aspect of its surface and the great, "dimly appreciated" depths of its interior.
Posted by Kashyap Deepak