Ulysses : An Introduction by Terence Killeen

James Joyce's obsession with the figure of Ulysses (the Romanised form of the Greek Odysseus) went back a long way. He told the Italian critic Carlo Linati that Ulysses had fascinated him ever since boyhood. When a fairly standard essay topic, "My Favourite Hero", was assigned to the boys in Belvedere College around 1895, Joyce chose Ulysses in preference to more macho figures such as Achilles or Hector.

In Rome in 1906, he thought of writing an extra story for Dubliners, to be called "Ulysses". This was to be about a Dubliner called Alfred H. Hunter, who lived on Clonliffe Road and whose wife was rumoured to be unfaithful. Although, as he regretfully wrote to his brother Stanislaus in early 1907, " "Ulysses" never got any forrader than its title", it is clear that he was already thinking about a story where the fortunes of the hero would develop in ironic parallel with those of the hero of Homer's epic, The Odyssey.

There may have been a particular reason for Joyce's interest in Hunter, apart from his rumoured cuckoldry and alleged Jewishness. Hunter may have rescued and taken care of Joyce after the future novelist suffered a painful encounter with the partner of a woman whom he had accosted in St Stephen's Green, soon after he met Nora in June 1904. Although the story is shrouded in uncertainty, this obscure Dubliner did in any case provide the catalyst for the greatest novel of the twentieth century. 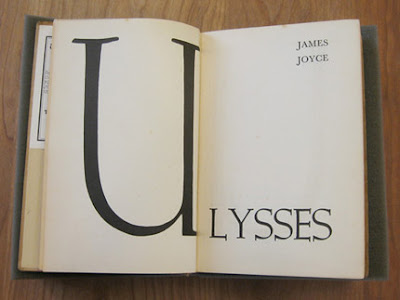 Later, while the book was being written, Joyce told his friend Frank Budgen of the basis for his admiration for Ulysses: he saw the hero of Homer's epic as a complete, all-round man, using both brain and brawn in a manner very unlike those born bruisers, Achilles and Hector. Ulysses was reluctant to go to war, he was concerned about his son, he was a master tactician, he had many wiles, he was a wanderer, he was fond of music: all traits that Joyce's "Ulysses", Leopold Bloom, will echo. Bloom is a modern epic hero, showing the qualities that a modern Ulysses would require.

However, Joyce's interest in The Odyssey is not confined to the figure of Odysseus/Ulysses. His novel is patterned, in an astonishingly creative way, on the whole of Homer's epic. Each episode of Ulysses re-creates an incident in The Odyssey, sometimes a full scene, sometimes a few lines, and not necessarily following the original's chronology. There are 18 episodes, each of which was at one stage given a name derived from The Odyssey ("Sirens", "Cyclops" etc.). Later, Joyce dropped these names, but they still provide a guiding template, under which the main characters -- Bloom, Stephen, (who is Telemachus, Odysseus's son), Molly, (Penelope, his wife) -- pursue their lives, unaware of the mythical patterns they are re-enacting.

The importance of the Homeric parallels is made clear by the fact that the book owes its very title to them; but a reader or listener coming first time to the work will be most immediately struck by its direct rendering of the characters' consciousness -- the famous "stream of consciousness" technique. We feel we know these people from the inside out, in a manner virtually unprecedented in literature. The effect is achieved by dispensing with the normal "he thought", "he mused", "he said to himself" and rendering the characters' inner worlds directly. When Bloom swallows a mouthful of wine, the listener hears: "Seems to a secret touch telling me memory." In a more conventional novel, this might read: "The wine, he thought, was acting like a secret touch, calling up his memories." Joyce drastically condenses it, giving the sentiment a far greater degree of immediacy. Particularly striking in that example is the omission of a word after "to", probably a word such as "be" or "act like". The text is mimicking the rapid-fire action of Bloom's registration of his inner experience.

Bloom's, Stephen's and Molly's are the main consciousnesses explored in this way, but one of the most impressive things about Ulysses is that the technique can be, and occasionally is, applied to any consciousness: a priest: "Just nice time to walk to Artane"; a typist reflecting on a book she is reading: "Too much mystery business in it. Is he in love with that one, Marion?"; a boy whose father has recently died: "Death, that is. Pa is dead. My father is dead." And of course the stream of consciousness technique receives its finest, fullest expression in rendering the flow of Molly Bloom's mind in her magnificent monologue at the close of the work: "wasnt she the downright villain to go and do a thing like that".

Introducing a major innovation like the stream of consciousness technique might seem like the achievement of a lifetime for most novelists; but the extraordinary truth is that this is only one aspect of what James Joyce undertakes. His ambitions in Ulysses are much greater.

Perhaps the best way to obtain a sense of the projected scope of the work is to cite a letter Joyce wrote in Italian to Carlo Linati in 1920, when the book was nearing completion. Ulysses, he said, "is the epic of two races (Israel-Ireland) and at the same time the cycle of the human body as well as a little story of a day (life).. It is also a kind of encyclopaedia. My intention is not only to render the myth [of Ulysses] sub specie temporis nostri [in the mode of our time] but also to allow each adventure (that is, every hour, every organ, every art being interconnected and interrelated in the somatic scheme of the whole) to condition and even to create its own technique. Each adventure is so to speak one person -- as Aquinas relates of the heavenly hosts.

"Ulysses is then a complete prose epic; to regard it merely as a novel is too limiting. The episodes are individual units, almost self-contained. They are immensely varied; the reader or listener has to get used to a different technique almost per episode. Thus, most episodes have their own organ of the body attached to them: in the case of the funeral episode, "Hades", it is the heart; in the case of the newspaper episode, "Aeolus", it is the lungs. Similarly, most episodes have their own colour: in the episode in which Bloom first appears, "Calypso", it is orange; in the schoolroom episode, "Nestor", it is brown.

As the episodes go on, they become longer and more complex; Bloom and Stephen, the main characters, can seem to get submerged in the stylistic flood while elaborate textual games are being played with the reader. It can seem as if the book is setting off on several tangents at once, literally "losing the plot". This is not the case; it only looks as like it as damn it, as Finnegans Wake puts it at one point.

The most difficult thing for a reader to grasp, perhaps, is this notion of total form, that such an abstract entity as an episode of this book can dominate and determine the characters in it. But Joyce is insistent that each episode possesses a life of its own; he is interested in larger units than those of individual novelistic characters. And ultimately, the various episodes are meant to add up to something greater than the sum of their parts: a whole body, a whole life. The book's horizons constantly expand: by the end, as Joyce put it to Frank Budgen, Bloom and Stephen "become heavenly bodies, wanderers like the stars at which they gaze". This, though, is before the book's full-blooded return to earth in the person of Molly.

What also keeps Ulysses rooted to earth is the omnipresence of Dublin. Stephen and Bloom don't just gaze on the stars from anywhere: they gaze on them from the back garden of Bloom's house at Number 7, Eccles Street. The book's total form may transcend its characters, but it does not transcend Dublin, the ground and soil for all its imaginative leaps. The total form of Ulysses is the total form of the city with which it deals, and which it never even wants to escape.

Dublin's felt life -- its history, its characters, its politicians, its newspapers, its advertisements, its street life -- crowds the pages, lending authenticity and robustness to the inner worlds with which the book is so concerned. It is true that not all the city gets into Ulysses -- there is a whole underworld of slum life which is barely glanced at, and the life of the upper echelons too scarcely features -- but what is given to us, unforgettably, is an imaginative reconstruction of a lost world. Joyce's Dublin -- the Dublin of Joyce, the Dublin that Joyce experienced -- is preserved for ever. At one stage Stephen says to Bloom: "I suspect . that Ireland must be important because it belongs to me." He isn't joking. Neither is Joyce.
Posted by Kashyap Deepak