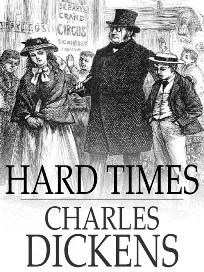 Facts and figures. In 1978, when I was 17 and in my first year at university, I read approximately 3,500 pages of Dickens. I've not revisited any of his novels in the 34 years since, except A Christmas Carol andHard Times. A Christmas Carol because I wrote a foreword for it, andHard Times because there was something unDickensian about it that intrigued me. Set in a northern mill-town rather than Dickens's usual London, Hard Times tackles politics in an uncharacteristically rigorous fashion, bringing it closer to Disraeli's Sybil than Pickwick Papers. Dickens seizes on utilitarianism – a philosophy most of us recognise as benign and socially progressive – and vilifies it as a great evil that poisons the human spirit. He expresses his loathing for trade unions, too. It's all rather problematic, but Dickens just about pulls it off through sheer force of will, creating those unforgettable (and weirdly Kafkaesque) schoolroom scenes in which zombie-like pupils spout verbiage like "Quadruped. Graminivorous. Forty teeth, namely twenty-four grinders, four eye-teeth, and twelve incisive."
My affinity, as a novelist, with Dickens has been overstated. I relish the way everything in his prose pulsates with life force, and I'm in debt to him every time I invest inanimate objects with uncanny animism. But his female characters annoy me. Not the grotesque ones – Miss Havisham, Mrs Micawber and other delicious monsters. It's the nubile, noble heroines I find irksome. Their vapidity and sexlessness is often attributed, by pundits whose acquaintance with Victorian literature is scant, to the moral climate of the era. Yet other Victorian authors managed to sneak eroticism into their work, and if Dickens had put his titanic talents to the challenge of sublimated sex prose, he could easily have out-porned Bram Stoker. He just didn't want to.
Which brings me to another reason for recommending Hard Times: it contains the closest thing to a real, complex woman in Dickens' s fiction. Louisa Gradgrind may be as neutered as the rest of his heroines, but she's aware of her passionlessness, and blames it on the repressed upbringing she's been subjected to. In Great Expectations, Dickens created a femme fatale, but Estella is icily secure in her fataleness. Louisa remains achingly vulnerable, a cold fish who longs to be a warm mammal.
Posted by Kashyap Deepak