Edna Ferber's So Big received the Pulitzer Prize in 1924, and is considered by many to be the author's most popular work. She created the work for herself. She said, "I wrote my book because I wanted to write it more than anything in the world." Other works by Ferber include: Showboat and Giant, along with nine plays, two autobiographies, eleven short story collections, and thirteen novels. Of these works, So Big is memorable because of Selina Peake DeJong and her son, Dirk "SoBig" DeJong. In a juxtaposition of city and farm life, Ferber offers an exploration of the journey of life, with all the realities of love, death, failure and success. 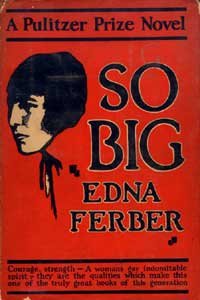 Thrill of Adventure?
Even as Selina goes about her everyday chores and fulfills her many responsibilities, her personality shines through: "Selina DeJong, darting expertly about her kitchen, from washtub to baking board, from stove to table, or, if at work in the fields of the truck farm, straightening the numbed back for a moment's respite... would wipe the sweat beads from nose and forehead with a quick duck of her head in the crook of her bent arm."

Selina has what Ferber describes as a "driven look." And, as the years accumulate on her body, Selina never shakes of her love of life, her understanding of human nature, and her passion for life: a will-to-live that makes people want to be near to her.

Early in the novel, Ferber writes, "in spite of her recent tragedy, her nineteen years, her loneliness, the terrifying thought of her new home to which she was going, among strangers, she was conscious of a warm thrill of elation, of excitement--or adventure!"

What About Adventure?
When we think of adventure, we usually imagine traveling to far-off lands, or experiencing the vastness of an undiscovered country. We imagine accomplishing a dream so vast that many men may have spent lifetimes in the attempt to fulfill it--without success. But, in many ways, Selina lived an adventure that encompasses all of this and more.

Selina's adventure was just a bit different. She traveled to a land, which, though not so very far away from Chicago, is vastly different. Raised by a gambling father, her only wish was to avoid becoming a "rotten apple" like her aunts. So, she left the comforts of city life to build a new life for herself.

She dug down until she couldn't reach much further. She became a part of the soil, understanding it and finding it beautiful. She clawed her way through the hard times. She never gave up. And, in the end, she accomplished something that nobody else in her position could have. While others laughed and called her crazy, she struck out toward her goal, never looking back.

As Ferber writes, "Life has no weapons against a woman like that."