Sensuousness is such a prominent feature of Keats’ poetry. Most readers tend to overlook his intends love towards suffering humanity. When Keats asserts “Beauty is truth, truth beauty” he does not mean by beauty, he means something which pleases the eyes and other sense organs, rather, then goodness. 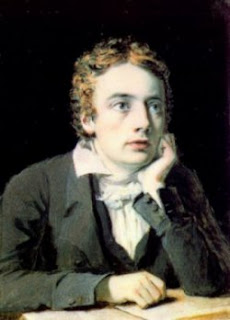 The word “Sensuousness”, according to Coleridge means “which belongs to five senses”. Sensuousness in poetry is that quality which appeals our five senses. In other words, it is a quality which affected our five senses of smell, taste, touch, hear, sight at once. Keats’ sensuousness is universal: the song of the bird, rustle of an animal, changing pattern of the wind, a smile of a child’s face--- nothing escaped from his watchful eyes. He composes his famous and last ode To Autumn after being inspired by “the stubble fields…………during his Sunday’s walk”. Just observes the sensuous appeal from the poem:
“Hedge cricket sing, and now with treble soft,
The red breast whistle, from the garden croft,
And gathering swallows twittering in the skies”.
The above lines gives comfort to our ears that is why Compton Rickett finds “symphony of sound” in these lines.
Matthew Arnold being overpowered by his sensuousness and asks “whether he is anything else”, and the answer is that as his mind matured, his sympathies broadended, there in him developed a sense of identification with human heart in travail. In his mature poetry, sensuousness is still wearing its fairy pattern but now the colouring is different. The trouble of the world come thick upon him when he watches his brother, Tom “specture thin” and lingering towards death. In his mature poetry, the love for nature is touched with the “still sad music of humanity”.
Now, just observes the sensuous appeal of sound from the poem Ode on a Grecian Urn in which Keats exhorts the piper to play on:
“Heard melodies are sweet, but those unheard
Are sweeter, therefore, ye soft pipe, play on,
Not for the sensual ear, but more endear’d
Pipe to the spirit ditties of no tone”.
These lines show that Keats had a unique gift of communicating with senses. The sensuousness in his poetry is so deep that Louis McNeice calls him “Sensuous Mystic”.
Keats believes that poetry should not advocate any philosophy and it should certainly minister the five senses. And the poet should present beautiful and colourful pictures appealing to the five senses. The following stanza from The Eve of the St. Agnis appeals to our five senses:
“All of its wreathed pearls her hairs she frees
Unclasps her warm jewel one by one
Loosens her fragrant bodice; by degrees,
Her rich attire creeps rustling to her knees,
Half  hidden like a mermaid in sea weed”.
A nightingale’s song heard in a garden inspired the poet to compose Ode to a Nightingale, however the most sensuous of Keats’ odes. He heard the nightingale’s song when

“The happy Queen-Moon on her throne
Cluster’d around her starry fays
But there is no light………..”
Now just observes the sensuous appeal to nature:

“Charm’d magic casements, opening the foam
Of  perilous sea, in fairy lands forlorn”.
These two example shows that like Wordsworth, Keats also finds sensuousness and imaginative inspiration in nature, but like him, he never finds a guide and teacher there.
Some critic believes that Keats’ sensuousness sometimes degenerates into sensuality. They maintain that he becomes extremely bluntly in some of his poems. But the fact is that he may be lewdly sensuous in his early poetry but as he gained evolved he becomes astisitically sensuousness. In his mature poetry his voluptuousness is fall of vitality and his sensuousness has fine sentiments. Just see the asthetic beauty of the following lines from Ode on a Grecian Urn:
“Bold love, never, can’st thou kiss
Though near winning the goal- yet do not grieve
She cannot fade, thought thou hast not thy bliss
Forever wilt thou love, and she be fair”.
Beauty was the creed of Keats, so he escapes into the world of beauty away from the work-a-day world of weariness. He is capable of extracting sensuous delight from the far off things. Cazamian says that Keats aspired depict the sensuous beauty in his poetry. Keats pictorial quality enables him to depict sensuous joys in an excellent manner.
In sum, poetry comes to him as “joy wrought in sensation”. Be it odes or sonnet or narrative poetry, Keats is richly sensuous. His sensuousness is not only delicate and delicious, but also asthetic and tasteful. In spite of its intensity, it does not degenerate into sensuality. Prominent Keatsian critics--- Arnold, F.W. Owen, Robert Bridges, Sidney Colvin, Salincourt--- in a article on Keats, in  John Keats’ Memorial Volume(1922) come to the conclusion that Keats was not exclusive a sensuous poet, a literary artist whose interest begins and ends with sensuous beauty. Keats writes to Mr. Forman “O, for a life of sensation rather, than thoughts”. Hence, no question eminence in the Keats’ poetry of the quality of sensuousness.
Posted by Kashyap Deepak